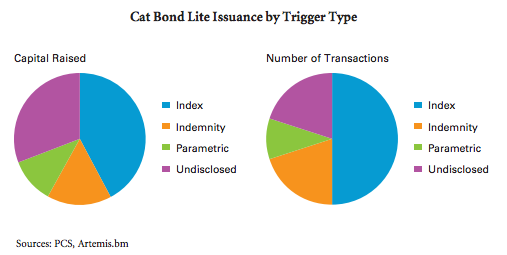 We can attribute the rapid growth of the catastrophe bond market to many factors, some of which extend back for years. However, PCS® sees five trends as particularly important this year, highlighting the expanding platform for market growth.

1. Cat bond lite proliferation: With ten transactions revealed publicly, 2014 has been active, following limited use of the cat bond lite structure in 2013. And three platforms now exist to facilitate issuance. But the cat bond lite sector is still in its early days, and activity in the fourth quarter (and into 2015) will help show whether the structure will be seen as a tactical solution or as having broader applicability.

2. Cat bond “heavy”: Through the first half of 2014, large catastrophe bonds took center stage. The average issuance this year reached $317 million, up 50 percent from the first nine months of 2013. Three large transactions accounted for more than $2 billion, an interesting development given the cat bond lite activity occurring at the other end of the spectrum. A continuation of this trend in the fourth quarter could put a full-year issuance record within reach.

3. Innovation trajectory:  The market has absorbed much of the innovation that has occurred over the past few years, demonstrating the usefulness of new ideas introduced. For example, cat bond lite structures gained momentum, showing that efforts to streamline the completion of smaller transactions have addressed a particular need. The return of Sanders Re with a $750 million transaction using the PCS Catastrophe Loss Index only for personal and auto risk transfer (excluding estimates for commercial losses) demonstrates the utility of that approach, and the continued growth of international issuance indicates the opportunities the ILS community sees in new markets. Continued innovation will be crucial to the continued rapid growth of the catastrophe bond market.

4. Strategic flexibility: The innovation trajectory ― along with the abundance of capital available in the market ― has led to an abundance of risk-transfer alternatives. Sponsors can use that flexibility to develop risk and capital management programs that address their specific needs more directly. Additionally, the catastrophe bond market has evolved through the sector’s investment in innovation to support more regions and trigger types. The use of PCS for catastrophe designation in indemnity triggers, for example, continues to grow. In 2013, three sponsors used that approach in four catastrophe bonds. This year, four sponsors have done so. And half of last year’s use of PCS for catastrophe designation occurred in the fourth quarter, suggesting that more could come to market this year.

5. New heights: Despite a silent third quarter, 2014 remains poised to set a record for total capital raised through catastrophe bonds. In fact, all it would take is a repeat of last year’s fourth-quarter issuance activity of $1.9 billion. However, the catastrophe bond market has shown us this year that history doesn’t always repeat itself annually. The likelihood of a new record this year will depend in large part on the entry of new sponsors into the market, and favorable rates, terms, and conditions in traditional reinsurance could divert those sponsors.