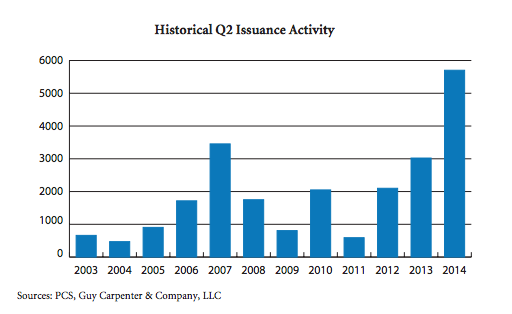 The rapid growth of the catastrophe bond market, which has reached nearly $6 billion in the first half of 2014, can be attributed to many factors, some of which extend back for years. However, PCS® sees five trends as particularly important this year, highlighting the expanding platform for market growth.

2. Activity at the extremes: Three more cat bond lite transactions this year were completed in the second quarter, following three in January (two of which were revealed to have used the PCS Catastrophe Loss Index). Further, sponsors completed the transactions using all three cat bond lite platforms. At the other end of the spectrum, the three largest catastrophe bonds of the year (Everglades Re, the first Sanders Re, and Kilimanjaro Re) provide an aggregate $2.7 billion in cover. As the outer boundaries of the market are pushed, the flexibility that the catastrophe bond market affords becomes increasingly clear.

3. Florida market: Sunshine Re and Armor Re, issued in May 2013, signaled to the market an increased likelihood that catastrophe bonds would begin to play a bigger role in June 1 renewals. Five Florida-focused catastrophe bonds came to market in the first half of 2014, including two from first-time sponsor Heritage Property and Casualty Insurance Company. American Coastal Insurance Company, a first-time sponsor in the second quarter of 2013, has also returned to the capital markets with another Armor Re issuance this year. And Sanders Re issued the first Florida market catastrophe bond that uses PCS for catastrophe designation in an indemnity trigger.

4. Cat bond “heavy”: The four largest catastrophe bonds of the year are well above the first-half average transaction size of $317 million, and two more fell just short at $300 million. Based on this year’s activity, it’s clear that sponsors can attain size in a variety of conditions. Kilimanjaro Re comes from a first-time sponsor, Everglades Re comes from a publicly managed entity, and Sanders Re uses an index trigger. Nakama Re ($300 million) provides cover in Japan. While sponsors have tested the market’s ability to handle smaller catastrophe bonds over the past few years, it’s clear they remain committed to testing the other end of the spectrum as well.