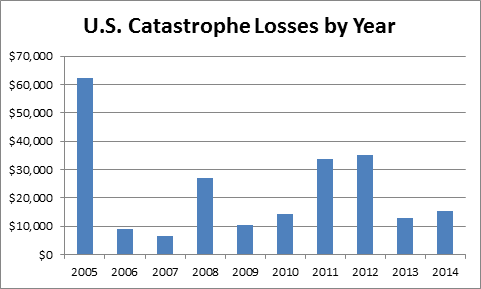 The peace and quiet in the Atlantic basin continues. Since Superstorm Sandy, only one event has approached $3 billion (a wind and thunderstorm event in May 2014). The most damaging tropical storm, Tropical Storm Bill in June 2015, caused insured losses of just under $60 million. Despite high frequency, the majority of events have been either severe thunderstorm or winter storm — which tend to be relatively small.

This year, PCS has designated 27 catastrophe events in North America (only two in Canada) as of July 27, 2015. Insured losses in the United States have reached only $9.2 billion, with another $60 million in Canada (with a preliminary estimate for one event not yet published as of this writing). It would take a significant event to bring 2015 up to the ten-year average of $22.7 billion.

Absent a major event, 2015 could become the lightest catastrophe year since 2007 and the second lightest in the past decade. While complacency is tempting, history shows that a trend like this doesn’t last forever. With $27 billion in losses, 2008 followed two years that experienced annual catastrophe losses of below $10 billion.

As the insurance and reinsurance industry prepares to rush around Monte Carlo tomorrow, an annual ritual signaling the start of the January 1 renewal season, the sustained lack of catastrophe activity in North America will likely be a frequent point of discussion. However, it would be prudent to remember that such periods of calm don’t last forever, and our industry is at its best when it prepares for the worst.

Read all posts in the Monte Carlo series >>