The 2016 hurricane season will come to an end on November 30. So far this year, two catastrophes have been designated as tropical events. Hurricane Hermine affected Delaware, Florida, Georgia, Maryland, North Carolina, South Carolina, and Virginia between August 31 and September 4 and resulted in approximately $245.6 million in insured losses. The other tropical event this year was Hurricane Matthew, which affected Florida, Georgia, North Carolina, South Carolina, and Virginia between October 6 and October 9. Those two events together have totaled more than $2.9 billion in insured losses so far, and both are currently open for further resurveys. 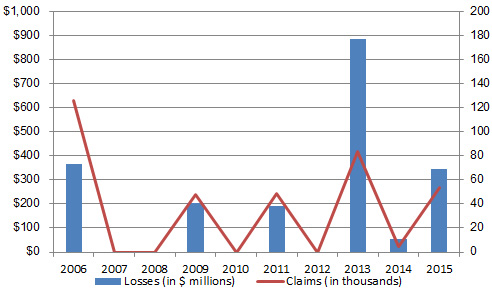 To get access to vital PCS® information on the go, download the new PCS-Mobile app for iPhone (link to App Store) and Android (link to Google Play).

The PCS Catastrophe Previews are proprietary and copyrighted documents that may not be copied or redistributed without prior written consent from ISO. Subscribers to PCS are permitted to copy the bulletins for their internal use only. The catastrophe loss estimates reported in the PCS Catastrophe Previews are proprietary intellectual property. They may not be used by anyone for any investment or insurance purposes without an appropriate license from ISO.

PCS is recognized around the world as the property/casualty insurance industry’s authority on catastrophic events in the United States, Canada and Turkey. In addition to providing a wide range of services to subscribers in the United States, PCS maintains contact with industry representatives in many foreign cities and Bermuda.