Claims teams are preparing for the unpredictable next few months. Significant catastrophe activity has occurred during the month of May over the past decade, with two events making the PCS® Top Twenty list. The month also signals the industry that hurricane season is right around the corner.

In the ten years from 2007 through 2016, PCS designated 39 catastrophes in May. All were weather-related events that in total caused approximately $29.7 billion in insured damages from nearly 4.1 million claims.

An average of four catastrophe events occurred during May between 2007 and 2016. With six events, May 2008 was the most active during this period.

The largest May event of the last ten years occurred in 2011: CAT 48 affected 20 states and caused an estimated $6.9 billion in insured losses from approximately 755,000 claims.

CAT 48 came in 11th on the all-time PCS Top Twenty list. Three years later, in May 2014, CAT 43 also made the Top Twenty list at number 20. That event affected 11 states and caused an estimated $2.9 billion in insured losses from approximately 437,000 claims. 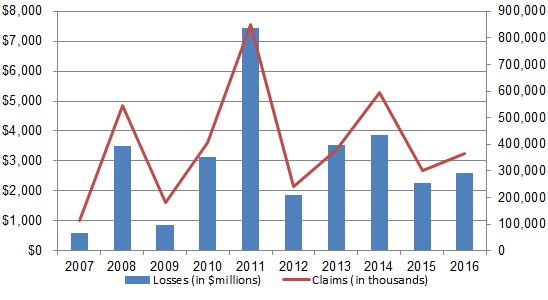