Property Claim Services® (PCS®) has designated 32 weather-related catastrophe events for the month of March between 2007 and 2016. Those events caused approximately $14.3 billion in insured losses and resulted in 2.2 million claims.

The largest designated March event in the past ten years was CAT 67, a 2012 winter storm. The catastrophe involved six states, had estimated insured losses of $2.5 billion, and generated approximately 300,000 claims.

In the past decade, March 2016 was the most active for catastrophe frequency. Seven wind and thunderstorm events that month resulted in $3.4 billion in insured losses and 441,000 claims.

Since 2007, the average catastrophe frequency for the month of March is 3.2 events, with 220,000 claims generating $1.4 billion in industry losses. 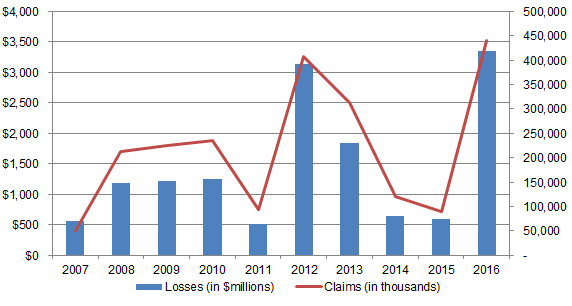