When the U.S. Supreme Court released the ruling on gay marriage last week, it ignited a national conversation — much of which was carried out over social media. Insurers that are not active on social media may have missed a critical chance to be thought leaders in that conversation. One insurance company chose last week to launch a new campaign that underscored its support for the LGBT community and indicated how the company pioneered extending married auto insurance rates to same-sex marriages. Not knowing in advance how the court would rule, the campaign was a statement of values that may have ultimately connected.

At ISO, we track social media engagement related to insurance companies as well as emerging issues. We noticed that, for the week of June 22, the amount of engagement the related insurer experienced, as measured by Twitter mentions, was more than double the previous high in the second quarter (see below). At the same time, the sentiment of the tweets for that week was quite positive for an industry where tweets may alternately gripe of rate increases or poor claims settlement experiences. Besides asserting its values in a way that appears positively received, the related insurer may have established a strategic footprint among a given community.

When history reflects on the Supreme Court’s decision in Obergefell v. Hodges, few will likely remember what insurance companies were tweeting about that week. But the social media world is one of instant gratification, and being a meaningful part of the conversation on any given day is often a win by any count. Insurers that are strategizing their campaigns and measuring what works versus what doesn’t may find themselves in the strongest position to grow market share and win loyalty in a dynamically changing market when they factor social media into that analysis. 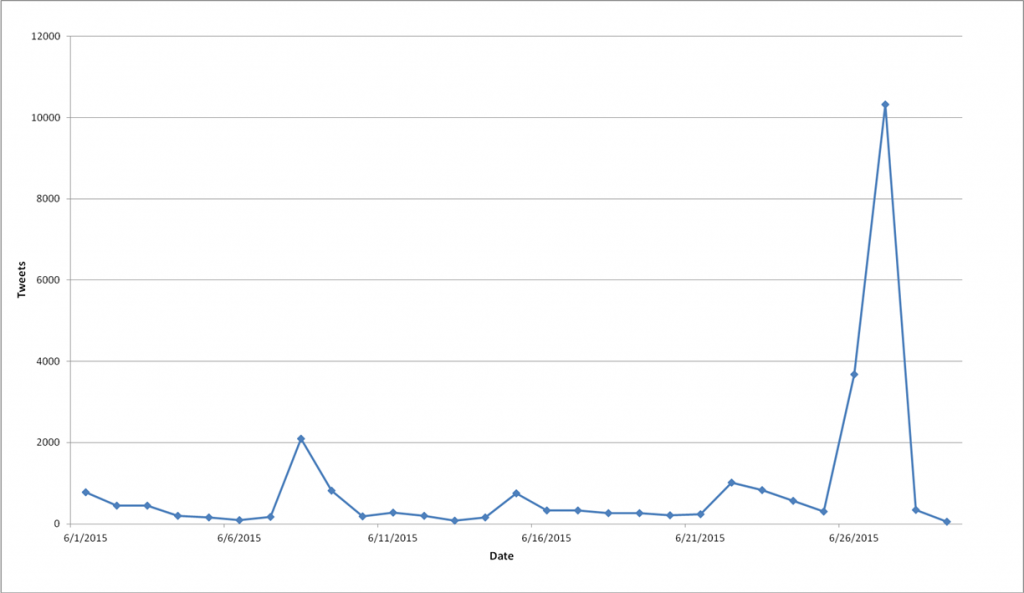 Jim Weiss is the director of analytic solutions for ISO, where he helps develop and implements the ISO Risk Analyzer® suite of predictive modeling products and services. Mr. Weiss is also leading new efforts to use social media and wellness analytics in property/casualty insurance. His articles have been published in Carrier Management, Telematics Wire, and Verisk Review, and he often presents insights at insurance industry events such as those sponsored by the Property Casualty Insurers Association of America and the Society of Insurance Research. Jim graduated with a bachelor of science in mathematics degree from Manhattan College and has earned the designations of Fellow of the Casualty Actuarial Society (FCAS), Member of the American Academy of Actuaries (MAAA), and Chartered Property Casualty Underwriter (CPCU).