A New Era of Hail Detection

From 2011 into 2013, the entire contiguous United States radar network was upgraded to dual-polarization technology. For the radars, this simply meant that instead of emitting solely horizontal energy, vertical energy would now be emitted and captured as well. Empowered with two dimensional data, it was now possible to begin to differentiate between precipitation types, such as heavy rain and hail.

On top of this, in 2014, the National Weather Service also began implementing a new radar scanning pattern. This new pattern effectively doubled the temporal resolution of near-ground data, allowing for a scan to be completed every two minutes instead of every five. For hail detection, this could greatly improve the accuracy of hail start and stop locations as well as fluctuations in hail size throughout the storm life cycle. 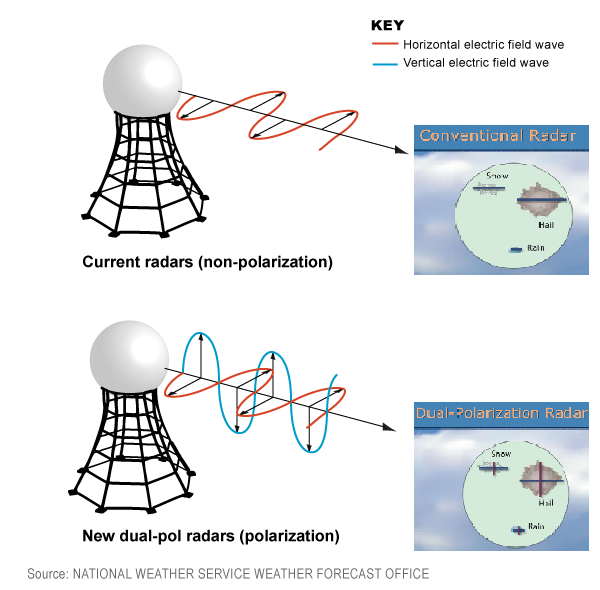 The state-of-the-art hail data and analysis that Verisk Climate delivers to clients uses the latest radar technology advancements to map precisely where hail fell and how severe it was. Our hail update for the 2015 severe weather season marks the insurance industry’s first availability of hail data derived from these two U.S. radar infrastructure improvements, dual-polarization radar data and two-minute radar data frequency.

The resulting data is used by property, auto, and crop insurance and related markets to proactively respond to catastrophes, verify insurance claim accuracy and predict demand surges in building materials and labor. It’s integrated into customer enterprise platforms and our products including

A thunderstorm cell is moving across Mississippi during the height of the severe weather season. Traditional radar products indicate very strong radar returns, indicative of large hail in the core of the storm. However, weather spotters on the ground only measure a few relatively small hailstones with most reports indicating just heavy rain. So what happened to the hail?

Traditional radar scans are only able to measure the intensity of falling precipitation. In this case, the intensity of the precipitation was quite heavy, shown by the red colors in the top half of the image, but the hail was melting as it fell to the ground. This resulted in smaller hail sizes or no hail at the surface. Using dual-polarization technology, the radar data can be used to categorize the objects being hit. In this example, the additional information from dual-polarization, shown in the bottom half of the image, indicates that in the heavy precipitation regions, only small hail and rain were reaching the ground, shown in dark green, with only a couple very small pockets of larger hail, shown in red. By taking advantage of sophisticated dual-polarization technology, a more accurate hail swath can be obtained. 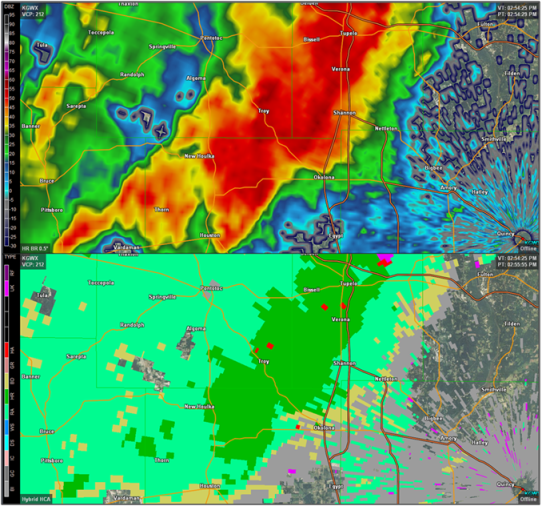 A strong tornado is carving a path through a residential area. Debris can be seen flying thousands of feet through the air by witnesses to the event. However, they are not the only ones who can spot the debris.

Weather radar has been identifying what has been termed debris balls for years, circled in black in the image. A debris ball shows up as an area of high reflectivity on traditional radar, indicated by dark red and pink colors in the top half of the image. That means this debris ball can actually be mistaken for hail by traditional hail algorithms. With the advent of dual-pol, weather radar algorithms can now distinguish debris from weather, such as hail. This is because dual-pol data is capable of determining an approximate shape of the object it is hitting. In this case, the debris is correctly identified, pink colors in the bottom half of the image, and is clearly distinguishable from the large hailstones just to the north, circled in blue and indicated by a red color in the bottom half of the image. The incorporation of dual-pol data makes it easier to define areas of actual hail by removing instances of debris or other non-weather related radar clutter. 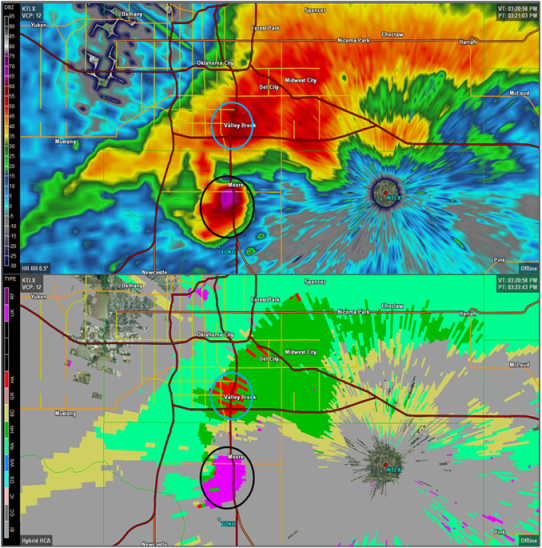 A springtime thunderstorm capable of producing large hail is racing eastward at over 70 mph. The thunderstorm begins to approach a populated urban center when traditional radar completes a scan of the storm. After five minutes has passed, the traditional weather radar has completed another scan. This scan shows that the storm has passed completely through the urban area and decreased dramatically in strength. Without more information, traditional hail algorithms would be forced to use logic that would smooth the data between these successive radar scans, creating an educated guess of what may have occurred during those five minutes. But what actually happened during those five minutes was never exactly known, was the city hit with large hail before the storm died down or was it spared?

Using more frequent scan data, the issues of smoothing between successive radar scans are dramatically reduced by using twice as many direct observations. In this example, an additional image of the storm when it was directly over the city could have been obtained. The image may have revealed that the storm had already begun a rapid decline in strength. With this additional information, a more accurate hail swath indicating more precise locations of damaging hail would be created. The data in this case helped to limit the area of damaging hail to far western portions of the city, instead of encompassing a larger portion of the metro area.

To discover more about how you can take advantage of the latest advancement in hail data technology, please contact Patrick Pollard, VP Insurance Solutions.