Florence formed near the Cabo Verde Islands on September 1st, not long after the start of peak hurricane season, which began in mid-August and ends in late October. Over the next several days, Florence intensified into a category 4 hurricane as it moved into the central Atlantic. After moving over cooler sea surface temperatures and encountering stronger winds aloft, Florence weakened into a tropical storm. However, she eventually moved back into an environment more conducive for further development, at which point she began to strengthen. By September 10th, she was once again a major hurricane. As Florence approached the North Carolina coast, she gradually weakened and made landfall just south of Wilmington, NC as a category 1 hurricane, on September 14th.

As Florence approached land the forward speed of the storm slowed, which brought drenching rain across North and South Carolina. In addition to flooding caused by storm surge, several days of heavy rain lead to catastrophic inland flooding across the region, with some locations receiving over 30 inches of rain. Rivers continued to rise in the days following the storm, adding to the problem.

Florence’s strong and persistent wind also caused damage across the Carolinas. With the wind field extending a few hundred miles inland from the coast, the impacts were felt beyond the coastal communities. The image below highlights the strength of Florence’s maximum wind gusts by county. Maximum wind gusts greater than 40 mph occurred within the counties highlighted in yellow and wind gusts of 70 mph or greater occurred within the counties highlighted in orange. According to Verisk’s Respond Hurricane data, Wilmington, NC experienced wind gusts in excess of 100 mph. Other communities in southern North Carolina that experienced similar wind gusts include Broad Creek, Emerald Isle, Sneads Ferry and Swansboro. Several tornadoes were also reported across North Carolina and Virginia from September 14th – September 17th. 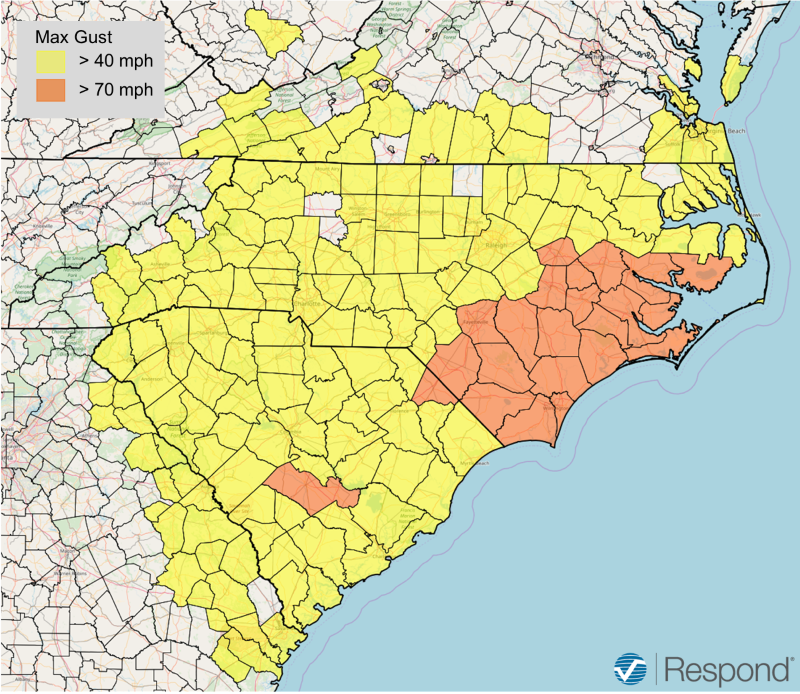 Using Respond Hurricane™ Before and After the Storm

Verisk’s Respond Hurricane provides insurance carriers with high resolution 5-day forecasts and post-event data of wind speed, storm track, and storm surge. Prior to Florence’s landfall, carriers used the forecast data to analyze their exposure across the likely affected areas and to better determine where to deploy resources for catastrophe response.

Atmospheric and Environmental Research (AER), a Verisk Analytics company, provided the first views of inland flooding from Florence shortly after the rain moved out of the Carolinas. The technology, based on microwave observations from satellite sensors, captures the extent of flooded areas over a geographic area. The image below shows the flooded areas across the North Carolina and South Carolina coasts. Insurance carriers use these data to determine exposure within the flooded areas. Timestamps allow carriers to see when flood waters have receded, enabling them to make more informed decisions during the claims process. 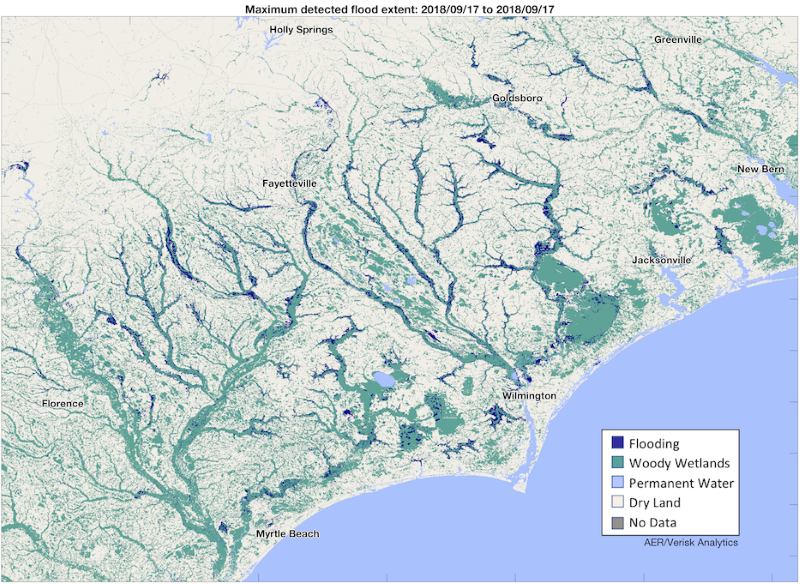 Cortney Shepard is a Senior Product Manager at Verisk Weather Solutions and is responsible for product innovation and development of Benchmark. She works with customers to help them become more resilient to the effects of weather and mitigate risk from natural hazards through integration of weather data into their business.