It’s midwinter in the Northern Hemisphere, and we’re looking ahead to February with a review of historical catastrophe activity. In the ten years from 2007 through 2016, PCS® designated 28 catastrophes during the month of February. These included 26 weather-related events and two workers' compensation events, which together caused approximately $9.8 billion in insured damages and generated nearly 1.7 million claims.

The largest event for February since 2007 was CAT 68, a 2015 winter storm that involved 20 states and generated approximately 217,000 claims at an approximate cost of $2.1 billion. February 2015 also remains the most active month in catastrophe frequency since 2007, with five PCS-designated events. These totaled approximately $2.9 billion in insured damages and more than 317,000 total claims (including those from CAT 68). 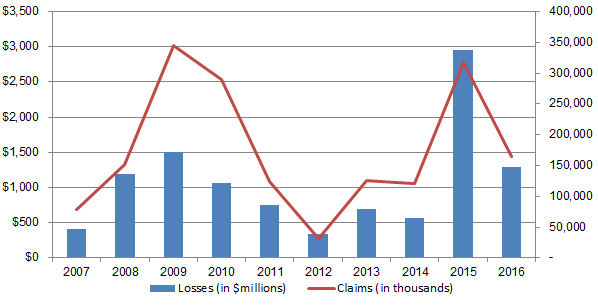