Theresa May has indicated she intends to trigger Article 50 of the Lisbon Treaty by the end of March 2017. After that, the United Kingdom has about two years to negotiate withdrawal from the European Union. With no historical precedent, Brexit has brought a great deal of uncertainty about how the process will work.

There have been mixed economic results since the June referendum. On the positive side, overall U.K. economic growth is up half a per cent. In addition, the service industry grew 0.8 per cent, and tourism is up by just under half a per cent. The UK has also seen a reduction in its export trade deficit.

On the negative side, the latest figures from the ONS (Office of National Statistics) indicator showed a decline in the construction sector by about 1.5 per cent. According to the ONS, this is the weakest construction performance in four years.

A survey by Deloitte found that nine out of ten construction finance managers said that the level of business uncertainty within the construction industry was higher than normal. Industrial manufacturing and agricultural output are down, and the U.K. is seeing increases in the costs of imported commodities and fuel.

Following the referendum to leave the EU, the ONS published figures showing that construction output declined across-the-board between June - September 2016:   Public housing construction was down 2.1 per cent, private housing was down 1.2 per cent, infrastructure was down 5.1 per cent, and finally repair and maintenance was down 3.6 per cent.

In 2016, the ONS reported that the Consumer Prices Index (CPI) rose to 1.6 per cent in December, which is an increase over the November figure of 1.2 per cent. Rising inflation will further affect the increase in costs that we’re already seeing in fuel prices and imported raw materials and semifinished goods.

One of the biggest impacts of the referendum result was the immediate devaluation of the pound. During the middle of October 2016, the pound was down 22 per cent against the dollar. The impact of a devalued currency can be clearly seen in metal commodities, with copper being one of the most volatile.

With the decrease in sterling value, imports of copper semifinished and final goods are more expensive in the UK. Rising costs will begin to affect underlying activity within key end-user sectors. The chart below shows an overall decrease in the real value of copper of around 4 per cent per tonne since August 2015. The price of copper has risen around 13 per cent thanks to the unfavourable exchange rate. 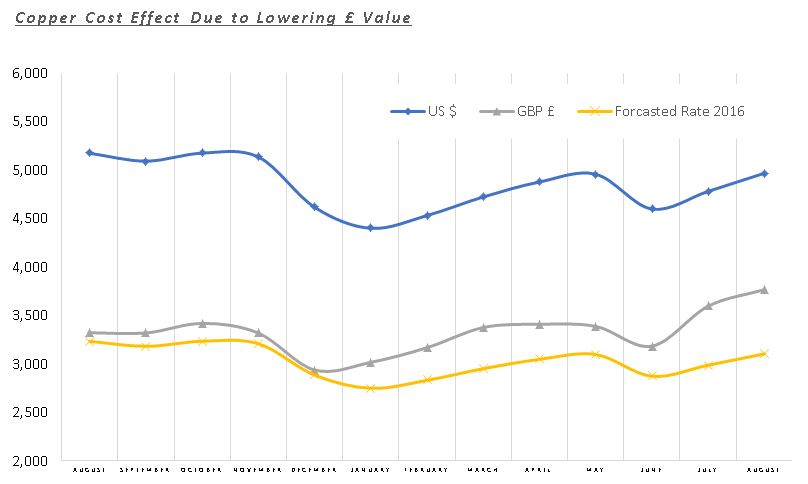 At Xactware, our pricing data services strive to provide the best possible insight into repair and restoration costs. We wouldn’t expect the anticipated cost increases to instantly affect the industry; normally, there’s a 3- to 6-month lag. However, this doesn’t seem to be the case now, as our latest research in fourth-quarter 2016 shows prices are already rising. In addition to copper-related products costing 2.26% per cent more, plywood prices have increased about 2.29 per cent, carcassing timber prices have increased about 1.69 per cent, and all gypsum-based products show an increase of about 1.67 per cent.

Here at Xactware, we’ll continue to monitor the aftermath of Brexit with regard to its effects on the economy and the impact on your materials spending and the construction sector as a whole.

James Bowen is Xactware’s U.K.-based pricing services manager for the United Kingdom and Europe. He has responsibility over the material, plant, and labour research for the regional pricing that Xactware publishes for the U.K. and Europe; he also conducts closed-claim reviews and audits for insurers. James’s team expands the Xactware schedule of rates and works with clients to implement their schedules within Xactware’s products. James previously worked as a project manager for several large national builders in the U.K. and has extensive experience in the residential, defence, and commercial construction industry.