The Atlantic hurricane season is here; in fact, hurricane season officially runs from June 1 to November 30. As we move into the second half of summer and the peak of hurricane season, some areas of the U.S. are still recovering from last year’s record-breaking storms. As reported to Xactware® through 2018 Q2, hurricanes Harvey and Irma totaled more than 840,000 assignments with over $7.9 billion in insured property losses.

Colorado State University | Every spring, multiple sources release forecasts for the upcoming hurricane season. I’ve chosen to focus on the forecast by Colorado State’s Tropical Meteorology Project, through the Department of Atmospheric Science, which releases an annual forecast for tropical activity in the Atlantic Ocean. As meteorological conditions change, the forecast is updated throughout the spring and summer months. The table below summarizes both the initial forecast released on April 5, 2018, and the most recent forecast from August 2, 2018:

For the complete forecast released by Colorado State: https://tropical.colostate.edu/

For the initial forecast released by the National Hurricane Center in May 2018: http://www.cpc.ncep.noaa.gov/products/outlooks/hurricane.shtml

In total, the 2018 season is expected to produce approximately 12 named storms, including 5 hurricanes, according to the most recent Colorado State forecast. So far this year, we have seen 4 named storms, 2 of which became hurricanes: Beryl and Chris. Compared to last year’s season through August 10th, there were 6 named storms, 1 of which became a hurricane. Although the start to this season appears slower, it is still above average for the Atlantic basin (based on data from 1966-2009); typically, by mid-August, there are only 3 named systems, one of which is a hurricane. Tropical activity in the Atlantic tends to reach its peak by September 10th (National Hurricane Center https://www.nhc.noaa.gov/climo) 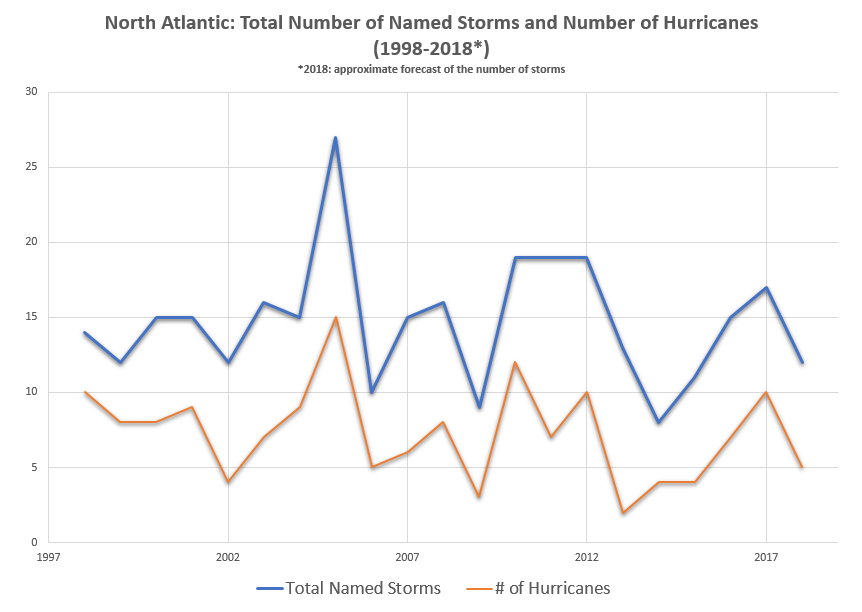 On average, more named storms tend to form in the eastern Pacific than in the north Atlantic. Generally, the western/northwestern motion of these storms carry them along the western coast of Mexico or out into the central Pacific. This was the case with Hurricane Hector, which received attention from the media as it threatened the Hawaiian Islands. The track of the storm brought it within a couple hundred miles south of Hawaii on August 8-9th, resulting in rough surf and storm surge along the southern coast, as well as some tropical-storm-force winds and precipitation.

Four named storms have moved through the Atlantic this season; approximately 8 more are expected to develop in 2018. Even though the season is now expected to produce fewer than the recent 20-year median of named storms in the Atlantic, just a single storm can cause immense devastation.

For example, in 1992, only 7 named storms impacted the north Atlantic. However, one hurricane, Hurricane Andrew, is well-remembered for causing widespread destruction across Florida and the Gulf Coast states.

The carriers who best served their policyholders following Harvey and Irma were those who were prepared to immediately deploy in the hardest hit areas. 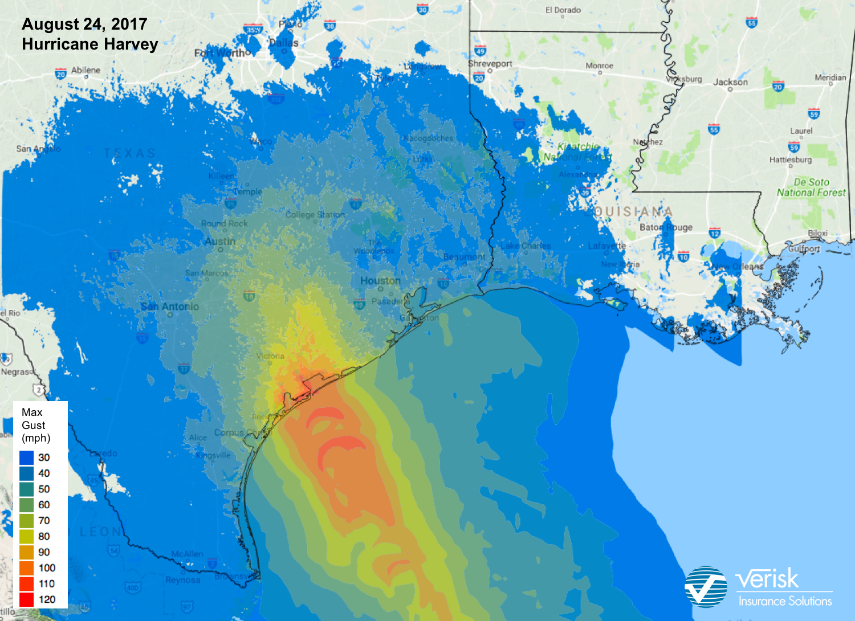 Many carriers used Respond® to determine which policies the storms would likely affect, allowing them to anticipate their impact more accurately. Up to 5 days before landfall, Respond customers were able to utilize the forecasted path and wind field analysis to determine the areas most likely to experience significant impacts. With this information, they could more accurately forecast claims volume and respond more quickly with the proper level of resource deployment.

The vast number of claims received after the storm also created many challenges for claim adjusters, whose workload had spiked. Benchmark® reports provide property specific weather information to aid in making the claims process more efficient. Claims can also be fast-tracked for payment, allowing adjusters to focus on more complicated losses while reducing cycle times for those impacted.

To learn more about how Respond and Benchmark can prepare you to serve your policyholders more quickly this hurricane season, please contact weathersolutions@verisk.com.

For more information on hurricane preparedness from the National Hurricane Center:

For more information on hurricane preparedness from the National Weather Service: