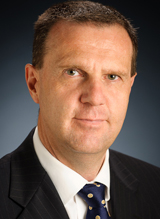 Neal Anderson is president of Wood Mackenzie, a global leader in data analytics and commercial intelligence for the energy, chemicals, and metals and mining industries. He is responsible for the overall business performance of the company.

During his more than 27 years in the industry, Mr. Anderson has worked for BG Group as a petroleum geologist in the Asia-Pacific and U.K. regions and in the strategic planning group, where he was involved in the development and implementation of upstream and downstream corporate strategy, economic evaluation, and asset acquisition.

Mr. Anderson holds a BSc (with Honours) degree from Queen’s University Belfast and an MSc from Imperial College London.

Mr. Anderson has been an active member of the U.S. National Petroleum Council since 2010.