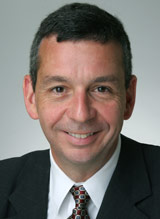 Mr. Thompson joined the company from McCarter & English, LLP, a regional law firm of more than 400 attorneys, with headquarters in New Jersey and offices in seven cities. He was chairman of the firm's Corporate, Securities, and Financial Institutions practice group and a member of the Strategic Planning Committee. While at McCarter & English, Mr. Thompson specialized in mergers and acquisitions, securities law, corporate finance, and general corporate counseling.

Mr. Thompson has managed a number of major mergers and acquisitions outside the property/casualty arena. He has also advised public companies on their securities law responsibilities (including those under Sarbanes-Oxley) and on the implementation of various antitakeover defensive strategies. From 2000 to 2004, he taught mergers and acquisitions at Seton Hall Law School, where he was an adjunct professor of law.